Skip to content
Home/Importance of Calibration Series: History of Horsepower
Previous Next

Most of us take calibration and standardized measurements for granted, not even thinking about the chaos that would ensue without it. However, the impact of unstandardized measurements would make life extremely difficult. Imagine trying to follow plans to build a deck on your house without predefined measurements like feet, inches, metres, or centimetres. A skilled carpenter might be able to figure out ratios of vague construction plans, but for most of us, it would make building a deck almost impossible.

Also, without any measurement standards, calibration would not be possible. If every village, town, or country had different measurement definitions, it would render calibration or any kind of verification redundant. So, standardized measurements make replication, production, comparisons and calibration possible.

What does this have to do with horsepower? While society has moved beyond the primitive days of people living in small and isolated, nomadic villages where there weren’t any industrial standards, horsepower is still interesting for a couple of reasons. First, the term “horsepower” denotes a horse being the measurement standard. But what kind and size of horse? How do you verify or calibrate it? Horsepower is a standard of measurement contained in an equation, which is a bit different, especially given the timeframe when it was first used.

Secondly, horsepower is a popular but often misunderstood measurement to describe vehicles, small engines and even handheld tools. When purchasing a new vehicle, it’s impossible to accurately compare engines if you don’t understand what horsepower really means. Also, without a solid understanding of horsepower, it’s easy to be misled by dubious marketing claims and tactics that misrepresent horsepower when selling a product.

Modern vehicles have a wide range of horsepower ratings. A 2019 Honda Civic Sedan (DX to Sport) is rated at 158hp at 6500rpm, whereas a 2019 Dodge Challenger has 717hp at 6000rpm. Even with a standardized unit of measurement, it’s difficult to comprehend and compare these numbers. Visualizing over 700 horses pulling a car is rather ludicrous and almost impossible to grasp that sort of power.

Horsepower is even more confusing when applied to the small engines found in lawn mowers. For example, until October of 2013, horsepower was used to market walk behind lawn mowers. Since horsepower was normally used as a measure of power for larger engines and the idea of horses pulling along a lawn mower caused confusion. Having 4-5 horses pull a walk behind lawn mower seems absurd and doesn’t accurately describe the capability, job capacity, or application of this kind of engine.

Small engines used in applications such as walk-behind lawn mowers are now measured in torque and CC’s. Torque is a better way to measure lawn mower engines because it describes the rotational power that the engine produces, which is important for mowing. The higher the torque, the more turning force is available, which will do a better job at cutting tall, thick grass. Whereas CC’s (Cubic Centimetres) represents the volume of the engines cylinder chamber, not an accurate way to indicate the engines’ power.

So, what is horsepower, and what does the horsepower rating mean in terms of performance? It seems logical to assume that one horsepower (hp) equals the power of one horse, but is that really the case?

The concept of horsepower has been in common usage for more than two centuries. This measurement was first popularized by James Watt, the famous Scottish engineer, who achieved fame and fortune for his work with steam engines. Watt is one of those rare individuals who has a measurement unit named after them. The watt is a derived unit of power that measures the rate of energy conversion.

An English inventor named Thomas Savery who patented an early steam engine design in 1698, was the first to compare the output of horses with the engines. Watt discovered Savery’s idea, using horsepower to help market his steam engines.

Two researchers named Stevenson and Wassersug took a brief look at the definition of horsepower in a 1993 article in Nature. Their previous work had estimated that the maximum sustainable power of an animal per kilogram of muscle would range from 100 to 200 W. By applying these numbers to the total muscle mass of a horse, they estimated that one horse could, for short periods of time, produce far more than one horsepower.

Therefore, Watt based his definition of horsepower on the amount of work that a horse could do in a full day, not on peak performance. For example, other studies have shown that a horse can remain vigorous and healthy if it works at an average rate of 1 hp, which is equivalent to pulling about 10 % of its body weight at moderate speeds for a 10-hour workday.

Regardless of the accuracy of Watt’s calculations, having a standardized definition for a unit is always beneficial. Having a defined unit of horsepower made it easy to compare engines to each other, allowing calibrations and verifications to take place. In addition, by comparing engines to horses, Watt created a visual image that proved to be a useful marketing tool.

Prior to 1972, car manufacturers rated engine power in units of brake horsepower (bhp). This was a measure of an engine’s power before accounting for the loss in power caused by the gearbox, alternator, differential, water pump, and other components. The “brake” refers to the device that loads the engine and holds the number of revolutions per minute (RPMs) at a constant value. An engine dynamometer serves as a brake, and power is measured at the crankshaft output. Because power is measured at the crankshaft, brake horsepower doesn’t consider the power that is lost in the transmission system. In other words, like most estimates of horsepower, it doesn’t measure the “true” power that reaches the wheels of the car.

Due to several new emission control standards that came into effect in 1972, bhp was no longer used, since too many devices were added to vehicles that reduced their effective engine power. As a result, net horsepower became the new norm that was developed by the Society of Automotive Engineers (SAE).

In 2005, the SAE introduced a voluntary program that allowed carmakers to calibrate and certify the horsepower ratings of their cars. SAE certification requires the engine to be tested in an ISO 9000/9002 certified facility and witnessed by a qualified independent witness, who verifies equipment function and calibration, as well as computations and engine test settings. 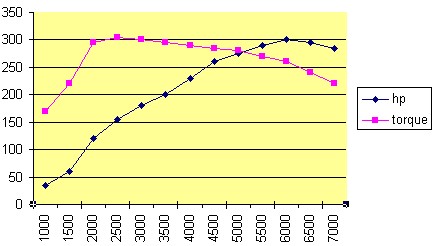 This graph shows that any engine has a peak horsepower — rpm value at which the power available from the engine is at its maximum. An engine also has a peak torque at a specific rpm. For Example, it’s common to see this expressed in a brochure as “320 HP @ 6500 rpm, 290 lb-ft torque @ 5000 rpm”. An engine has “low-end torque” when the peak torque occurs at a low rpm value, like 2,000 or 3,000 rpm.

Although most people don’t think about the importance of standardized measurement or calibration during their daily lives, the world would be in a state of chaos without it. With no measurement standards and a means to verify them, you wouldn’t have the computer or device you’re using to read this blog post. Due to the calibration difficulty, it would make any kind of mass production extremely complicated and unfathomably expensive.

Horsepower is a great example of this because it’s one of the first instances where a standard of measurement was developed to compare steam engines, allowing for calibration and verification. Horsepower of a system of measurement is over 200 years old, based on an equation, and despite being often misunderstood it is still being used today. Because of its continued use, it’s important to understand how horsepower originated and what it means.

Who are we?
Pylon Electronics is the largest independent laboratory for calibration and repair of measuring instruments. Where are offered our services?
We are proud to serve Canada. A recognized experstise
Our reputation is based on the experience of our technologists and exceptional customer service.